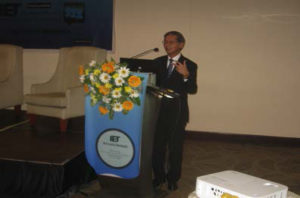 “ Urban Systems Engineering for Livability and Sustainability ”
The evening forum of OET Sri Lanka Network for the month October 2016 “Urban Systems Engineering for Livability and Sustainability” was held on 13th October 2016 at Hotel Galadari Colombo 1. The forum was conducted by a prominent Engineer, Eng. Khoo Teng Chye ,Executive Director, Centre for Livable Cities, Singapore.
The world is experiencing urbanization at an unprecedented level. Already, more than half the world’s population lives in cities; this is expected to increase to 70% by 2050. Hence cities are likely to determine future sustainability of the world’s populous. Cities will experience unprecedented complexity, which presents engineers and professionals challenges beyond their ﬁelds of training and expertise.
This lecture was based upon Centre for Liveable Cities’ research and analyses on Singapore’s urban developmental journey from the lens of urban systems and CLC’s Liveability Framework. Participants were informed about how Singapore overcame its early challenges and continues to tackle its challenges across engineering and urban domains through a multi-disciplinary approach. 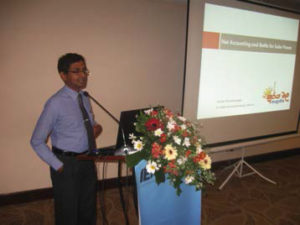 “ Net Accounting & Battle for Solar Power”
The evening forum of IET Sri Lanka Network for the month November 2016 “ Net Accounting & Battle for Solar Power ” was held on 17th November 2016 at Hotel Galadari, Colombo 1. The forum was conducted by Eng. Harsha Wickramasinghe Deputy Director General (Strategy) Sri Lanka Sustainable Energy Authority. “Sooryabala Sangramaya” (meaning „battle for solar power‟) is an intervention seeking the transformation of small scale distributed generation market. Sri Lanka had more than 30MW of rooftop solar PV capacity installed by end 2015, after ﬁve years in practice, reaching out to the „viable‟ 3% of the ﬁve million-customer base. The “Sooryabala Sangramaya” was launched on 6th September 2016, to make the remaining 97% of the customers to invest in power generation using their rooftops, avoiding government investments, and relieving land use pressure created from the demand for solar energy parks. The programme aims at creating a mass market for small mass produced modular systems of capacity 1kWp, driving prices well below the current market prices (LKR225,000/kWp installed capacity). The new scheme oﬀers customers to export excess energy and earn LKR22.00/kWh in the ﬁrst seven years and LKR15.50/kWh in the next thirteen years. The government intends to develop a sizable market for solar equipment, inviting the attention of game changers to usurp the large volume market in Sri Lanka, responding to the rapidly changing market parameters. The programme also expected to provide a low cost, modular and easy to use system for an all-inclusive price of 140,000/kWp making it aﬀordable to a larger number of lower volume users. We are not far from the day where large number of µPPs plays decisive roles as negative loads and congestion drivers at the same time. Tomorrows utilities are not immune to these global trends and are required to design appropriate coping strategies than 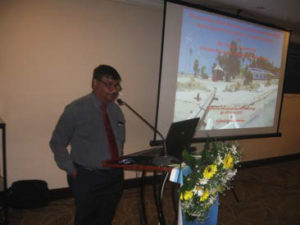 At present there are 800 habitants in the island and there are two schools, a dispensary, a church and a society building in the island. Even before implementing the hybrid system, electricity supply was available in the island around the clock with CEB owned diesel generators connected to 400V distribution network. The daily demand of the electricity was 190kWh and the average daily peak demand was 25kW. With Diesel generation alone, the unit generation cost was around 0.6 USD/kWh and an estimated amount of 88000 kg of harmful pollutant emissions such as Carbon dioxide, Carbon monoxide etc. was released to the environment annually due to diesel burning.
The main objective of the implementation of the hybrid energy system is to optimum utilization of the indigenous energy sources available in the island such as wind and solar to be integrated with Diesel generators to cater the demand aiming to reduce the unit cost of electricity generation up to 0.38USD/kWh and limit the releasing of harmful pollutant emissions to the environment as low as 8000kg/year.
The hybrid energy system has been implemented under the ﬁnancial and technical assistance
of Asian Development Bank (ADB). ADB has conducted the feasibility studies. Additionally, ADB has granted equipment worth of USD 0.4M for this pilot project. CEB has spent additional LKR 50M for the construction and commissioning activities of this hybrid power plant.

The system is composed of a 32kW diesel generator, six numbers of 3.5kW wind generators and 184 numbers of PV panels totally account for 46kWp of solar power generation. An energy storage system of 52kW consisting of four Lithium Ion battery modules is available for recovering the system from the possible disturbances caused due to mismatch in electricity demand and supply. The grid forming single phase inverters connected to the battery bank determine the scheduling of the diﬀerent energy sources to supply the demand at the optimum cost. All generators load and energy storage system are integrated to the main switching unit named as Multi-cluster box. The Multi-cluster box has a facility to switching generating sources according to the schedule provided by the grid forming inverters. Additionally it has an intelligent load and battery management system to maintain system quality parameters such as voltage and frequency within the prescribed limits. There are separate individual controls systems incorporated with wind generators and PV system to maximize their eﬃciency at any operating condition. For instance, the mechanical pitch control system is used in wind generators to guarantee the operation of the generator at the maximum eﬃciency under variable wind speeds and the PV inverters have the maximum power point tracking algorithm to generate maximum power at diﬀerent solar radiation levels. There is a load management system which can control some selected loads for instance, agricultural pumps or water distillation system to utilize the excess power available in the system in a more productive manner.

The system has been commissioned and connected to the distribution network on May 2016 and by now it is successfully in operation. By considering the eﬀectiveness of this system, ADB has decided to provide the ﬁnancial assistance to implement similar hybrid systems in other three islands, Nainathivu, Analtvu and Delft as well. Therefore in the very near future the island inhabitants of Sri Lanka will get an access to cleaner and cheaper energy supplied by CEB with the optimum utilization of indigenous energy sources available in their backyards. 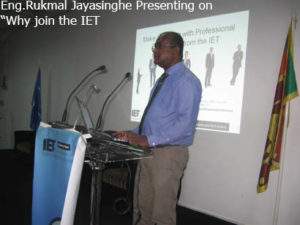 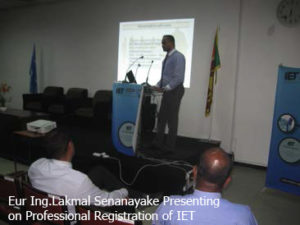 The intension of the forum was to convince the audience of the importance of professional registration as an important milestone for any engineer or technician to establish their proven knowledge, understanding and competence. In particular, registration shows peers and employers the commitment to professional standards and to develop and enhance competence. The IET is licensed by the Engineering Council of UK to award the professional engineering qualiﬁcations deﬁned in the UK Standard for Professional Engineering Competence. 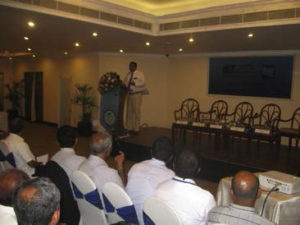 Mr. Palitha Samarasinghe Project Director, Colombo Suburban Railway Project.
Railway Electriﬁcation is a dream of the Sri Lankan Engineers for a long time. Despite, various attempts over the times this project never came to reality due to various circumstances. Anyhow with the pledge of ﬁnancial assistance by Asian Development Bank in year 2015 this project got into a new life. ADB ﬁrst pledge a Project Preparatory Technical Assistance grant to commission a consultant in carry on a project preparatory study which was completed in year 2016. Now the project is at functional state.

Mr. Rudolf Martinez ,Team Leader, PPTA Consultancy Joint Venture, EGIS
The basic transportation study revealed that the potential candidate access corridors for electriﬁcation as the PanaduraPolgahawela and Kelani Valley corridors extended up to Ingiriya. The study group with extensive studies managed to scope and prioritizes both electriﬁcation as well as railway modernization in general.
Eng. Rianzi Fernando , Electrical Expert, PPTA Consultancy Joint Venture, RDC
Electriﬁcation of the Sri Lankan Railway is primarily a complex project which extends totrack modernization, station modernization, Bridge construction and signal modernization. But within such complex scope electriﬁcation single out as the most important of all. The selection of voltage, architecture, caternary structures and functional substation is well established but novel technology to Sri Lanka. It is a challenge to identify the exact design optimum for Sri Lankan Railway within the spectrum of such designs. 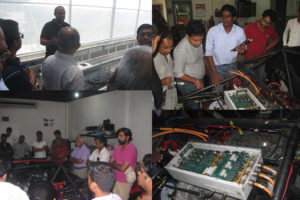 “ VEGA High Performance Electric super Car ”
A Field Visit was organized on 17th June 2017 to visit the Vega Technologies (Pvt) Limited, Trace Expert City Maradana. The visit was to witness the progress of the development of the High performance electric car and share their knowledge among IET members.